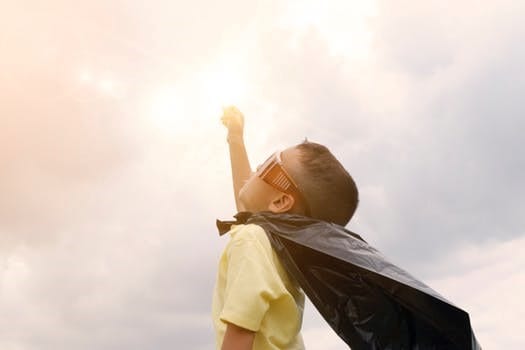 Have you ever wanted to be a superhero? Yeah me too. It never happened for me though. At least not in the way I thought it would…. Maybe you are like me. Let me try and explain.

At times when I talk to leaders about their careers many express or even lament the fact that they aren’t in a more service-oriented occupation. A doctor, firefighter, civil or military officer, humanitarian, or clergy member seems to them to be occupations where they could truly serve the greater good and actually contribute and help humanity. These are often the professions of superheroes in their eyes. It was mine at one time too.

Though my response to this thought has varied over the years, it now has become a steady one that I’ll admit is not always kind nor well received. When a leader shares with me they wish for a career that makes a bigger difference I look at them with a funny expression on my face. This includes one eye opened wide with my eyebrow raised and the other eye narrowed, my shoulders shrugged up, and my arms out with my palms up and then I exclaim, “Really?! You’re kidding me right?!” And then I kindly invite them to wake up. You see being a leader carries tremendous responsibility. Each leader within any organization has a massive impact on our society. Whether leaders choose to accept it or not, they play a huge role in the lives of those they lead. And their impact goes well beyond the walls of the office.

All of us, as strong as we try to be, and as skilled as we may be at separating our work from the rest of our life, are still heavily influenced by it. And how our boss or supervisor or leaders treat us and how they behave at work impacts us in one way or another in every aspect of our lives. If that isn’t superpowers, I’m not sure what is!

And a leaders influence not only impacts those they lead but also all those people who their team members interact with outside of work including their families. Honestly, I can’t think of a higher calling or greater opportunity to serve humanity than to be a manager, supervisor, or leader who influences people who they’ve never even met.

Now imagine a world where all leaders truly embraced this? A world where leaders could see how what they did impacted not only those they lead but also those beyond the walls of work. Imagine leaders armed with this knowledge and a determination to serve and help others just as the best doctor, firefighter, or clergy person would in an emergency. Imagine leaders who believed they truly were superheroes. Though the urgency and need for help isn’t as apparent in our profession, it doesn’t change the fact that it exists. People, our people, need good leadership.

The reality is, all of us have been influenced by good and bad leaders. And all leaders have the incredible and humbling opportunity and privilege to impact the lives of others for good or for bad. When you want an occupation that serves others and contributes to humanity and the greater good—one that feels and looks a lot like a superhero—look no further than becoming a leader.

Get Amazing Mondays in your inbox!